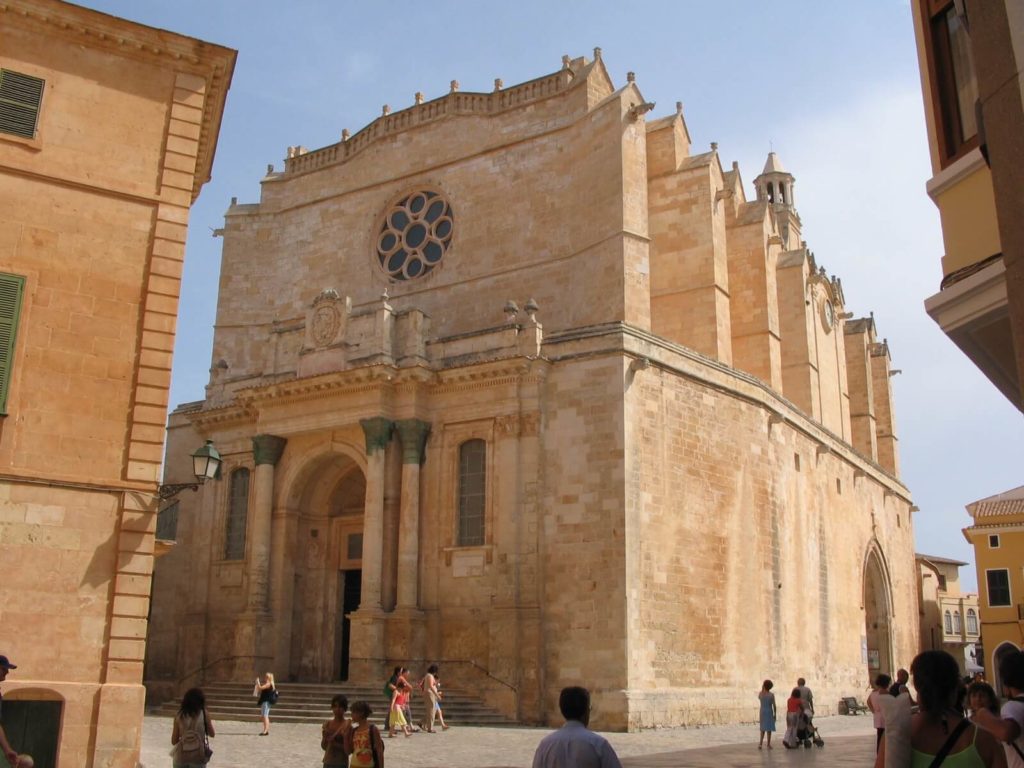 If your destination this vacations is to travel to Menorca, surely you will stay in Ciutadella. A beautiful fortified city, where its narrow streets take you back to the 16th century. It is of considerable interest, as part of the city was destroyed during the Turkish sack in 1558.

Here we are going to tell you what you can do in Ciutadella, so that you can make the most of the island:

1. Visit the Cathedral of Menorca:

Built in the 14th century, it is worth seeing for its architecture and majesty. Built over an ancient Arab mosque, where we can appreciate the arches of its ancient minaret in the bell tower of the cathedral, very characteristic of the Arab religious temples.

The neoclassical facade of the cathedral is later than the original construction, which was erected in 1813.

The visiting hours of the cathedral are from May to October from Monday to Saturday from 10:00 am to 4:00 pm. In any case, we recommend that you check before you go because the schedules are constantly changing.

The old town of Ciutadella is a perfect place for one of those long walks, without stress. …. we can wander through its narrow streets, admire the stately houses, eat an ice cream, etc.

“Ses voltes” is the main street of the old town that leads to the Cathedral square. It is a street where there are some “arches” and is known as “Ses Voltes” in Ciutadella.

The old town ends at the Plaza d’es Bron which is characterized by the presence of a large obelisk, which commemorates the assault of the Turkish fleet in 1558 by the sacrifice of its inhabitants, many of them lost their lives in this assault and many others were turned into slaves.

Do not leave Ciutadella without enjoying a good sunset.

Anywhere on the west side of Ciutadella the sunset is spectacular but the best place, for us, is Punta Nati. At only 7 Km from Ciutadella.

In recent years there is a queue to get to Faro Nati to see the sunset (especially in August) so another valid option is to see it from the “Castillo de San Nicolas” which was built for the defense and surveillance of the coast. It dates back to the 17th century and is located at the entrance of the port of Ciutadella.

It is a funerary construction of the Minorcan prehistory, which was restored in 1950.

It is currently open to the public so that it can be visited since its restoration, it is one of the best preserved buildings in Europe.

Its singularity in its shape lets us see, the shape of a ship upside down. In popular culture it is said that this monument was made by a giant who together with another one was disputing the love of a woman. When one of them (his brother) completed the well, the other man only had to place a single stone, which before his jealousy, decided to throw it, giving it to his brother who died and he, seeing the consequence of his actions committed suicide, the poor woman was left without suitors, which is said to have died of grief shortly after.

Its history dates back to between 1200 and 750 BC when it is said to have been used by early civilization as a mass grave.

5. Having a drink on a terrace in the port of Ciutadella:

After dinner and a stroll through the town you can not miss the opportunity to enjoy one of the terraces of the port. You can go down the slope of sa “Plaça d’es Born” and down the port where you will find, at the end of the port, an area with different bars with terraces perfect for a drink. Of course, prepare your wallet because the prices are disco prices.

If you dare you can stay in that area as it is the best area of the island for partying.

For a drink we recommend the terrace of the legendary Jazzbah.

Ciutadella has different types of beaches for everyone. At 5 minutes walking from the center we find “Sa platja Gran”. In nearby urbanizations we can find “Sa Caleta”, “Santandría, “Cala’n Forcat”, “Cala Blanca”, etc. In Ciutadella there are beaches to bore, but the one we like the most if we want to go for a couple of hours in the afternoon or in the morning is “Cala Morell”.
It is located in the north of Ciutadella at about 10km. If you want sand don’t go, most of the beach is rock but it has super clean water and is perfect for snorkeling.

In the south of Ciutadella we find the most famous beaches of the south of Menorca: Son Saura, Cala’n Turqueta and the beach of Macarella/Macarelleta. These three beaches are very famous for their white sand and crystal clear waters.
During the summer season you have to go very early if you want to find a parking… in fact you can only go to Macarella by bus since 2 summers.

We have different articles that talk about these beaches:

More information about Macarella and Macarelleta.

These are our best proposals to enjoy Ciutadella. Do you have any other proposals? Leave it in the comments!