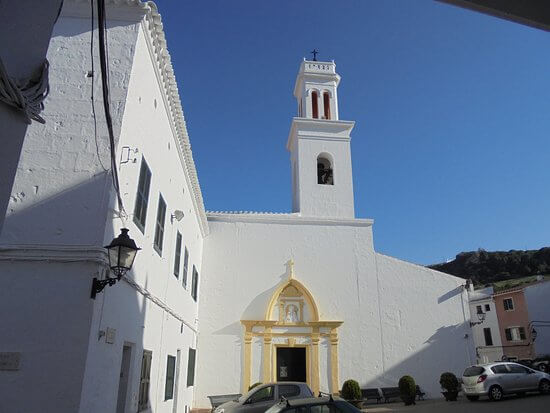 Ferreries is a municipality of Menorca, that stands out for being a calm town and where we will be able to see an old town full of white houses to the most Menorcan style.

If you are thinking of visiting the town we give you some ideas, Ferreries is a very small town with few tourist attractions but it is always nice to see its small streets and breathe its tranquility.  It also has some beaches in its municipality that are worth visiting.
We suggest a few things to do so you don’t go in blind.

1. Go to spend the day in Cala Galdana:

Although it is an inland municipality extends to the coast where we can find one of the best coves of the island, composed of fine white sand, is one of the best known beaches and visits of the island. We can also find the wonderful viewpoints of Riu and sa Punta, with excellent panoramic views. It is also surrounded by lush and beautiful pine forests, which introduce you fully into nature.

Access to it can be done by car, as it has a parking lot right next to it, we can also find services such as kayak rentals, jet skis or we can enjoy a day of diving.

It also has in its surroundings, restaurants where you can eat after a day at the beach.

More information on how to get to Cala Galdana

2. Walk to the Castle of Santa Agueda:

Located on top of a hill, 264 meters above sea level.

This castle built by the Arabs, on ancient Roman ruins, was the last point of Arab resistance on the island, before the invasion of Alfonso III. His nephew, Pedro IV of Aragon, would destroy it around 1343.

Nowadays we can see what remains of it, since in 1987 it was declared of Cultural Interest.

To access the castle we can appreciate the ancient Roman road.

3. Walk to the Church of Sant Bartomeu

An important church for the area of Ferreries, since this village was born around it. This church was used by the peasants of the nearby areas, before the population was concentrated. According to data from the region, it is not possible to speak of a population center until the seventeenth century.

The church has a single nave with side chapels, with a barrel vault, and its exterior is completely painted white. Threatened by its destruction, as it was made of unsound materials, it was rebuilt to increase security on 1798. Subsequently, the bell tower was erected around 1884.

The interior of this church is modern, since the altar, altarpieces and choir were burned during the civil war.

This impressive settlement is located on the ravine of Son Fou, this settlement of navetas or naviformes, which give the name to a period of prehistory.

It has been possible to discover 7 navetas of which two types can be found, square or horseshoe-shaped, although they are of reduced dimensions, the Cova de Moro stands out, the only one preserved with the original cover of the naveta.

In general, it stands out for the square stones that make up this construction. As was usual in its construction, materials such as wood, mud and branches, which do not stand the test of time, were used.

This village lived from the exploitation of the cliff, which also gave access to the sea.

More information about the settlement of “Son Mercer de Baix”.

5. Some wines at the “Hort Sant Patrici”.

The cheese produced in these facilities, depending on the ripening time, has a different flavor that makes it characteristic.

The wine is made from Merlot and Shiraz grapes, which gives it a pinkish color and a dry palate.

These are our proposals for Ferreries. Do you have any other suggestions? Leave it in the comments!